The Global Marketplace and the Common Good 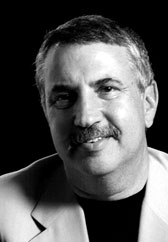 The signature event of the 2010-2011 Notre Dame Forum, “The Global Marketplace and the Common Good”, will feature Thomas Friedman, the influential Pulitzer Prize-winning columnist from The New York Times. Friedman has examined a wide range of subjects in his work, including globalization and worldwide economic issues, religious fundamentalism and terrorism, and the Middle East conflict. He has won three Pulitzer Prizes and has had four best-selling books, most recently The World is Flat and Hot, Flat, and Crowded, both currently best-sellers.

A reception in the DPAC lobby will immediately follow.

This event will be streamed live on the Web at forum2010.nd.edu, shown on screens in the LaFortune Student Center and shown via closed-circuit broadcast on campus cable channel 13. The stream will also be broadcast live in the Mendoza College of Business’ Jordan Auditorium, accomodating up to 350 viewers on a first come, first served basis.

The Global Marketplace and the Common Good articles

O’Donnell has covered a number of major breaking news stories for both NBC and MSNBC, including the September 11th terrorist attacks. She received the prestigious Sigma Delta Chi Award for Breaking News Coverage for a “Dateline NBC” story titled, “DC in Crisis,” on the night of September 11, 2001. O’Donnell then covered the Pentagon following the terrorist attacks. She traveled extensively with Secretary of Defense Donald Rumsfeld and reported on the war in Afghanistan and the war on terrorism.

O’Donnell has been a correspondent with NBC News since 1999, reporting for all the news division’s broadcasts. For Decision 2000 political coverage, she reported on the Republican primaries, the Republican and Democratic conventions, and the Florida recount battle. O’Donnell was also one of the anchors on MSNBC for election night, reporting on the congressional contests.

Prior to joining NBC News, O’Donnell was a staff writer for Roll Call, the Capitol Hill newspaper, where she covered Congress. She also traveled across the country to cover numerous House and Senate contests. From 1997-99, O’Donnell was also a contributor and news analyst for MSNBC.

Dr. Woo’s research focuses on strategy, entrepreneurship, and organizational systems. She currently serves on the boards of Aon Corp., NiSource Inc., Aileron, Catholic Relief Services, Maryknoll Sisters, and the Center for Creative Leadership. She is a member of the Board of Regents, University of Portland. Dr. Woo earned her bachelor’s degree in Economics with highest distinction and honors, a Master of Science in Industrial Administration with recognition as a Krannert Scholar, and her Ph.D. from Purdue University.

Prof. Anderson’s interests concern the religion and literature of the Old Testament/Hebrew Bible with special interest in the reception of the Bible in early Judaism and Christianity. His interests span the entire Bible but more recently he has put special focus on the book of Genesis as well as priestly literature.

Anderson has won numerous awards including grants from the American Philosophical Society, Lilly Endowment, and the Institute for Advanced Study at Hebrew University. His most recent book, Sin: A History (Yale University Press, 2009) treats the way in which metaphors for sin change from the First to the Second Temple period and how those changes decisively shaped the way Jews and Christians came to view the effect of sins and how they might be forgiven. This year he is a Senior Fellow at the Tikvah Center for Jewish Law and Civilization at New York University and is working on a book on the subject of charity for the poor.

Shanna Gast is a senior economics major and philosophy, politics, and economics (PPE) minor originally from Overland Park, Kansas. After spending a summer in Phnom Penh, Cambodia working with physically disabled students, Gast studied for a semester in Rome before returning to the United States to focus on urban education issues. During summer 2010, she interned at the U.S. Department of Education. She is currently writing a senior thesis examining the impact of income support programs on student academic achievement. On campus, Gast helps run Teamwork for Tomorrow, a literacy program in the South Bend community, chairs the Southeast Asia working group of the International Development Research Council, and conducts research on Chinese youth culture with the Kellogg Institute. In her time both away and back in the United States, Gast has developed a passion for helping children in poverty, no matter the country.

The Global Marketplace & the Common Good

Due to an overwhelmingly enthusiastic response to this event, tickets are no longer available. This event will be streamed live beginning at 7:00 p.m. on Nov. 3 and will be shown on screens in the Jordan Auditorium in the Mendoza College of Business and the La Fortune Student Center and via closed-circuit broadcast on campus cable channel 13.